Donald Trump entered the White House with a set of promises to radically change US foreign policy (Fischer 2016), headed under his slogan to put 'America First'. Even though many satirists followed up on Trump's 'America First' by asking if their country could be second, the statements Donald Trump makes on foreign policy leave foreign policy-makers struggling to understand his position. Apart from promising radical changes, Trump himself also seems to radically change his views with regard to earlier decisions. Think for example of his adjusted version of the travel ban, in which Iran was suddenly excluded from the list or his contradictory claims with regard to the Israeli/Palestinian conflict.

"Trump himself also seems to radically change his views with regard to earlier decisions."

Trump seems to be unlike any previous US president as he dares to challenge the conventional (or foreign policy elite) thinking of foreign policy assumptions and challenges the value of policy expertise (Byman 2017). This rather new behaviour makes him 'unpredictable' in the eyes of many foreign policy-makers as they are left groping in the dark while trying to make sense of Trump's views on foreign policy. Furthermore, Trump seems to increase rather than decrease the gap between knowledge and foreign policy making in his own government by making uninformed claims with regard to pivotal foreign policy issues (e.g. his clear lack of knowledge and unwillingness to learn about nuclear policy). This was ever clearer when he seemed to defy the basics of international diplomacy when he took a tougher stance on the G7 than on Saudi Arabia. The result? Merkel calling for a different type of EU-US relations.

Are these fears about Trump's capriciousness warranted? To shed some light on this question, I analysed some speeches of Trump prior to and after the US elections in order to uncover his belief system by means of the operational code analysis (Walker et al, 1998). The results of the analysis contribute to the knowledge of foreign policy makers and political analysts with regard to how Trump views the nature of political life and his strategic approach to political goals. I argue that changes in Trump's belief system align with the idea of political analysts that Trump's political beliefs are subject to change depending on the context in which he operates.

"In the period after the election Trump's beliefs indicate a more cooperative stance."

​In order to analyse Trump’s belief system prior to and after the US election, I made use of the operational code coding scheme developed by Walker et al. (1998) and ran the analysis with the Verbs in Context System (VICS) coding scheme. Prior to the election, I ran 56 speeches through the coding software leading to the results below. After the election, the four main speeches Trump gave were used for analysis. The low results prior to the election (see figure 1) indicate that Trump held more conflictual philosophical and instrumental beliefs than in the period after the election, where Trump's beliefs indicate a more cooperative stance. 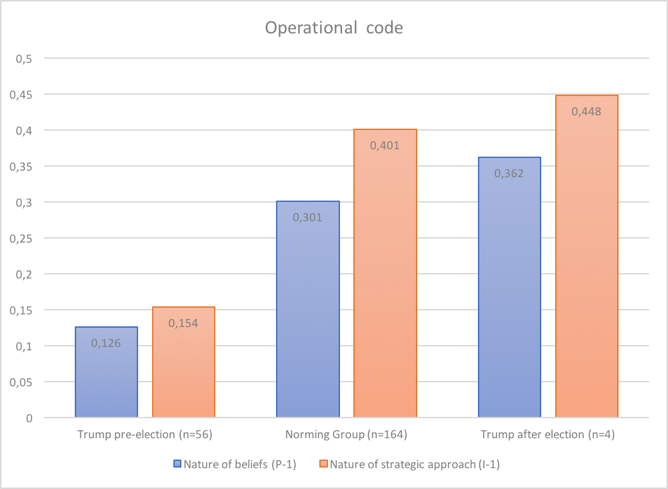 Many foreign policy analysts viewed Trump as a conflict-seeking leader during the campaign period, but their views seemed to change after his first speech in congress. Trump seemed to surprise them with a consensus-seeking approach (Tanz, 2017). These analysts seem to hypothesize that the change of roles (from campaigner to president) would have an effect on Trump's beliefs. Previous research indicates that beliefs of leaders can indeed be subject to change (Malici & Malici, 2005; Feng 2005), depending on factors such as role change, critical junctures or personality traits.

The changes in Trump's belief system prior to and after the US election seem to confirm the conflict-consensus hypothesis put forward by policy analysts. Furthermore, it leads to the question that if they changed here, they might change again and change the perspectives of foreign leaders in their depiction of the US as a trusted ally. If Trump's beliefs are indeed interchangeable, as this first data suggests, foreign policy makers would benefit from mere adaptive foreign policy strategies that are flexible and can deal with uncertainty.
Operational code analysis
​The operational code or "OpCode" analysis (George, 1969 in Gross Stein, 1994) is a scientific approach in order to understand core beliefs of (political) leaders about the political world. "This includes both philosophical beliefs and instrumental beliefs about the optimal way to achieve one's goals" (George, 1969 in Gross Stein, 1994). The "OpCode" is as such one example of a (actor-specific) model where the results can contribute to decreasing the knowledge gap between scholars and foreign policy makers. The "OpCode" analysis presents ten dimensions of political beliefs (see attachment). In this essay, I used results of Donald Trump's beliefs with regard to two of these: 1) the nature of the political universe (P-1) and 2) his strategic approach to political goals (I-1). These beliefs differ on a scale ranging from conflictual (-1.0) to cooperative (+1.00).